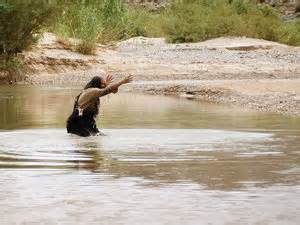 JOHN WAS THE PROPHET who prepared the way for Jesus’ ministry.  Like his younger cousin Jesus, John had a miraculous birth foretold by an angel of the Lord.  Born to aged parents of a priestly family, John was destined to be “great in the sight of the Lord” (Luke 1:15), the angel said, echoing similar promises made about Old Testament heroes.

The last recognized biblical prophet of Israel, Malachi, had lived about four centuries earlier.   In his last paragraph, he wrote God’s message: “Lo, I will send you the prophet Elijah before the great and terrible day of the Lord comes” (Malachi 4:5).  In many ways, John the Baptist was a new Elijah, coming out of the desert to challenge the authorities and inspire the people to live righteously.  In fact, Jesus said of John, “and if you are willing to accept it, he is Elijah who is to come” (Matthew 11:14).

Baptism was John’s specialty.  He lived by the Jordan River, and people flocked to him to be baptized in the water as a sign of repentance.  The mikvah bath was a well-known ritual of purification in Judaism, but John brought new life to it.  Wearing camel’s hair and eating locusts and wild honey, this rough-hewn hero was phenomenally popular.  “Repent,” he thundered, “for the kingdom of heaven has come near” (Matthew 3:2).

Religious and social leaders came to see what the fuss was about, and John lit into them, calling them a “brood of vipers!” (verse 7).  But John knew he was not the main attraction.  As popular as he was, he made clear he was just a forerunner.  Early on, this prophecy from Isaiah was connected to John: “The voice of one crying out in the wilderness: ‘Prepare the way of the Lord'” (verse 3; also Isaiah 40:3).  He talked about someone greater who would follow him, someone whose sandals he was not worthy to untie.

John continued his ministry even after Jesus started his, though John suggested to his disciples that they now follow Jesus.  Nevertheless, even John had doubts about Jesus.  While he languished in prison, John sent  his disciples to Jesus to ask the Lord if he was the promised one.  In response, Jesus both affirmed his messianic identity and the calling of his cousin.  After John was beheaded, Jesus’ disciples asked him about Malachi’s prophecy concerning Elijah.  He replied that “Elijah” had already come and was mistreated, just as Jesus himself would be mistreated.  Unmistakably, he was talking about his cousin John.

Hello my name is Barbara Ward. Thank you for visiting my blog page. I am a lover of GOD. I am a woman, a daughter, a sister, a mother, a grandmother, an aunt, a sistergirlfriend4life, a best friend, a confident, an owner, a team player, a leader, a loyalist, a producer, a builder, a negotiator, a creator. I AM PHENOMENAL! View all posts by wiseandlovelyme

This site uses Akismet to reduce spam. Learn how your comment data is processed.